What should I feed my snake?

A typical diet of most pet snakes consists of rats and mice. Regardless of the type of snake, it’s recommended that dead prey be fed, rather than live. If this guideline is not followed, it may event in the injury of your snake due to being attacked by the prey if it is not in the disposition to eat. It is law in the UK that only frozen prey should be fed. When using frozen prey, ensure you completely thaw in the refrigerator. Some people leave their rodents out at room temperature to defrost. Should you choose this method, ensure at all times the prey is covered to reduce risk of contamination by flies etc. Defrosting the prey item in the right conditions will also help to prevent deterioration of the food before consumption and by bringing the temperature of the prey to around room temperature), it encourages the snake to eat by masking the prey already being deceased. Tongs or tweezers can be used to dangle the prey in front of the snake until it is taken. If the snake is not interested in the feed within 1 hour, remove from its enclosure. Snakes may not have much of an appetite prior to or following a shed of their skin. Snakes should also be given sufficient time to digest their prey before being handled. Digestion can take up to 5 days so the recommended time to leave is 48-72 hours before handling after a feed. 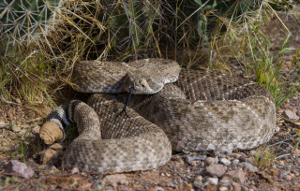 Snakes rarely have major nutritional deficiencies unlike most other reptiles, mainly because they are allowed to feed on whole prey similar to those they would consume in the wild. As long as your snake is provided with adult rats and mice to consume, it will most likely not need a vitamin or mineral supplement. Most nutritional deficiencies occur with juvenile snakes that are fed primarily on young prey with immature vertebrate and invertebrate prey (insects) that are not as rich in nutrients. The main nutrient they become deficient in is calcium. Most snakes should be fed a size of prey that is about 1-1.5 times the size around a snake's body at its widest point. This means that as a snake grows, you will have to adjust the size of prey fed to the snake to accommodate the snake's increasing size.

If you have a hard time judging how big around your snake is compared to the size of prey, simply take the measurement around your snake at the widest part of its body. If you take a piece of string cut to that measurement, you can find the circumference of your snake. It doesn't have to be an exact measurement, however; smaller or slightly larger prey is also sufficient and a bit of variety never hurts. Small hatchlings can be fed on mouse pinks (newborn mice) and then graduated to larger sizes (the terms we use are fluffs, small mice, then large and extra large). If you have a species of snake that grows large enough that will eventually require to be fed rats, it is a good idea to switch to these while the snake is still young to get them used to eating rats rather than mice. Younger rats that are equivalent in size to older mice and can be used for this transition. Rats are named with a similar succession: pups, fluffs, weaners, then small, medium, large and then giant). Some of the bigger breeds of snake will also consume whole rabbits and other large prey items. Our website provides lab bred rabbits which are the recommended rabbits for reptiles. It is not recommended to feed any wild prey to snakes. The guideline is that young snakes are fed around twice a week with the adolescent or adult snake being reduced to once a week. Some of the larger varieties of snake may only wish to consume prey once every 2-6 weeks but this is purely down to the individual animal and other contributing factors such as age and the environment they live in.

Snakes have unique jaws that allow them to swallow prey that is larger than their head, but your snake may have difficulties digesting overly large items, resulting in regurgitation so take care to ensure you choose the right size of prey.